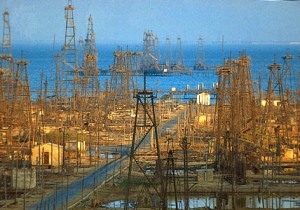 Father God is indeed great! After  three years of time off , the  Company I have worked with ,recalled my services to work with them again. T’was  a glorious moment in April 1997 !

Saipem [Oil Pipeline Company] had offered me a job assignment  in Azerbaijan a  country  known to be where the Ark of Noah landed , (supposedly in  the Mt Ararat in the Armenian border). It was  a state in the former Soviet Union and  was the world’s number 1 Oil producing field at the turn of the 20th century. Oil derricks were sprouting everywhere! Perhaps  John Rockefeller had gotten his wealth from there.

It was also a source of the best Persian carpets in the world. Yes, indeed it was a blessing to have been in that perfect peaceful place.

Oh how wonderful to have traveled again! I enjoyed the plane ride, saw new places and met new people. It was very interesting but most of all, truly rewarding.

3 years back, in 1994, I resigned from the same Company I had been with since 1987 in order to do some community service in my town , “pro bono”, “gratis”. It was a selfless experience which, interestingly, had brought some  sense of fulfillment and heavenly peace. I was happy!

The trip  to Azerbaijan  was of a Divine Providence, I know.

I could only be thankful for the love He always gives. He is great!

“All things work together for good to them that love God, to them who are the called according to His purpose”